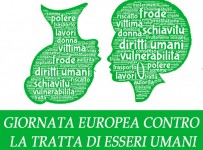 10 associations working against Trafficking in Human Beings. Every place where there is a violation of rights is the “South of the World”. Especially the rights of women and young girls, not yet adults. The desire to migrate abroad trying to build a better future is a profitable occasion for whoever recruits victims; at any cost and to obtain a high profit. It is a modern product of distorted global economy and the extreme demonstration of gender violence on a global scale. It is contemporary slavery and forced migration. The elimination of all forms of Human Trafficking is part of the European Union political agenda as well as of the Global Agenda. The achievement of three of the 17 objectives of Sustainable Development is bound to Human Trafficking eradication, in every country, without any exception.

Volunteers from HERZWERK WIEN association have reported that in Vienna there are about 400 “establishments” dedicated to sex trade (legal job in the country); there are thousands of women and young people working there, many of them coming from Nigeria and Eastern Europe. How many of them are exploited? The volunteers of the Austrian association constantly visit the places to offer support to those people that need it.

Although Nigerian trafficking criminal networks have been choosing Italy and particularly Sicily as main area of transit for many years, Movimiento por la Paz (MPDL) has verified a huge presence of young Nigerian women sexually exploited in Madrid, Spagna. The victims’ profile are: early age, low education and low skills, low self-esteem and lack of self-confidence. The sex industry contributes to the 0,85% of the GDP of the Country. As it happens in Italy, the young Nigerian girls exploited in Spain are mainly recruited in Nigeria, in many cases, with the active involvement of their families, friends and acquaintances. The particular vulnerability of the victims grows as a result of the experienced physical and psychological threats. Vulnerability increases and the victims’ age decreases.

The profile of the victims reveals itself similar in other countries: Gender Alternatives Foundation reports that in Bulgaria the girls come from rural areas, in particular belonging to minorities or groups of the population with social and economic difficulties that are normally recruited into human trafficking for sexual purposes. GAF offers a legal and psychological support, besides working on the issues of training and prevention.

The Association Plataforma Portuguesa para os Direitos das mulheres denounces the lack of visibility of the phenomenon of human trafficking in Portugal that mainly involves young women coming from Eastern Europe and Brazil. PpdM intervenes mainly through awareness campaigns and doing lobby, aiming to enhance the awareness of the population and institutions about the phenomenon of human trafficking.

In Colombia, as reported by the Association Amiga Joven, the victims of human trafficking are mainly young girls, between 7 and 18 years old. The determinant factors that influence the risk, is the exposition of the potential victims are the economic an education poverty, the rural and urban armed conflict, forced migration, a dysfunctional and unsettle family environment. Amiga Joven in Colombia is engaged in empowerment actions, in the elaboration and acting of strategies of educational prevention and in socio-political trainings of all thresholds of the population that are more exposed to the risk.

The Association ORMUSA of El Salvador points to the concept of vulnerability of young girls that live in conditions of poverty or in the controlled territories of the gangs that recruit and kidnap them for forced marriages since they are 9 years old. The majority of the victims in El Salvador are teenagers. One of the causes is the impunity of the traffickers. ORMUSA monitors constantly the situation in the country, works with the staff of the institutions that guaranty human rights and designs awareness campaigns.

Sicily offers an observatory- unfortunately- privileged; the girls tend to be younger, arriving in Italy at the age of 13, 14, 15 and 16 years old.

Some weeks ago, we have asked to the colleagues of the Association Girls Power Initiative (GPI) from Benin City, Nigeria, that were hosted in Palermo to give us more analysis’ instruments in order to understand the situation that has been going on in the South of Nigeria for more than 20 years. Benin City is a regional hub of human trafficking, and only the return from Europe of the ones that have achieved wealthy are the ones to be considered. The hundreds, thousands that remain stranded in the dynamics of exploitation, violence, coercion and sometimes even death, normally are obligated to remain forgotten.

A collective action to not forget.

All this is only a piece of the international network that we are building…
Together to so many other citizens of our city and from the world.

From South to South against Human Trafficking.